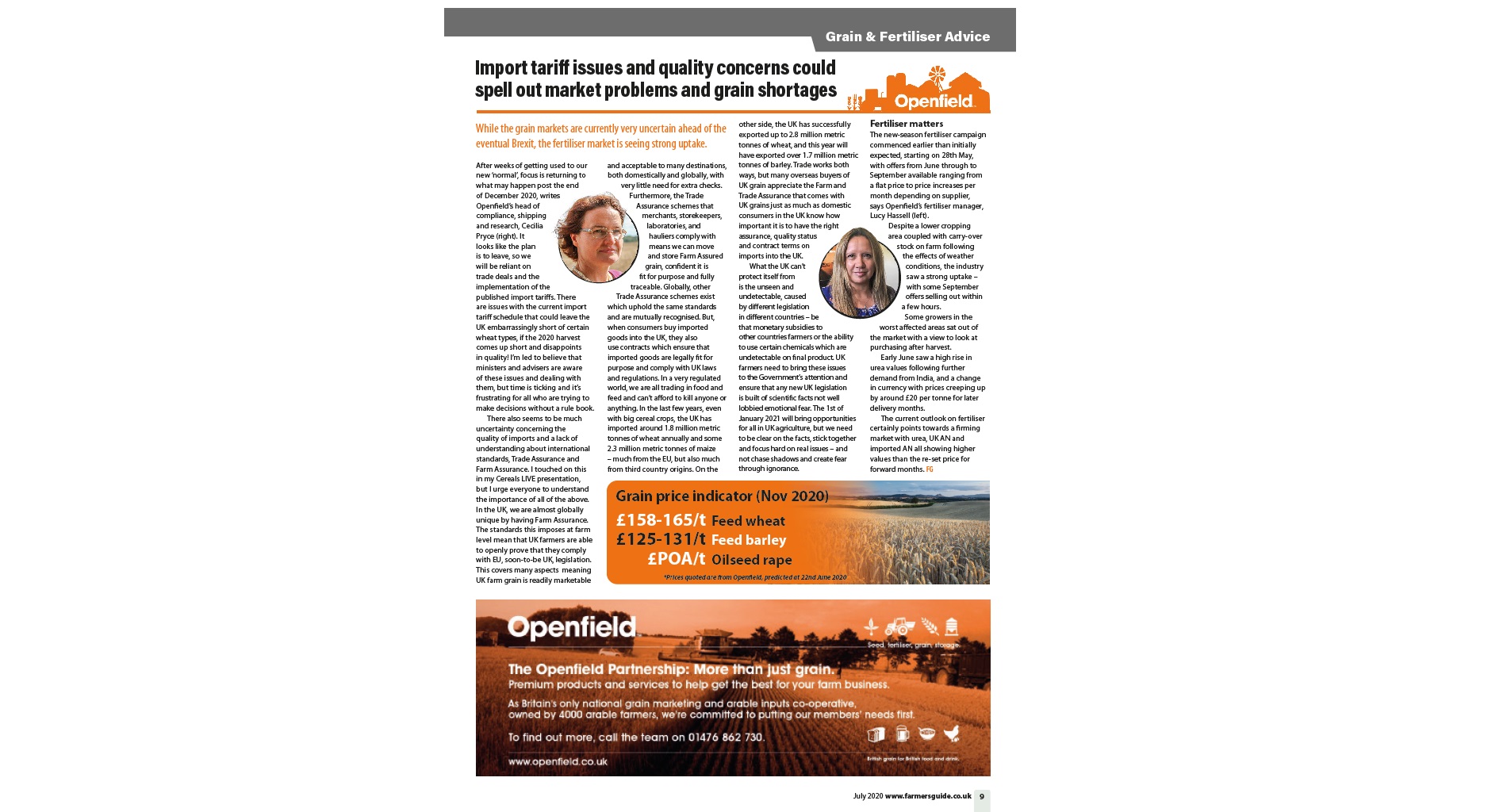 While the grain markets are currently very uncertain ahead of the eventual Brexit, the fertiliser market is seeing strong uptake.

After weeks of getting used to our new ‘normal’, focus is returning to what may happen post the end of December 2020, writes Openfield’s head of compliance, shipping and research, Cecilia Pryce. It looks like the plan is to leave, so we will be reliant on trade deals and the
implementation of the published import tariffs. There are issues with the current import tariff schedule that could leave the UK embarrassingly short of certain wheat types, if the 2020 harvest comes up short and disappoints in quality! I’m led to believe that ministers and advisers are aware of these issues and dealing with them, but time is ticking and it’s frustrating for all who are trying to make decisions without a rule book.

There also seems to be much uncertainty concerning the quality of imports and a lack of understanding about international standards, Trade Assurance and Farm Assurance. I touched on this in my Cereals LIVE presentation, but I urge everyone to understand the importance of all of the above. In the UK, we are almost globally unique by having Farm Assurance. The standards this imposes at farm level mean that UK farmers are able to openly prove that they comply with EU, soon-to-be UK, legislation. This covers many aspects meaning UK farm grain is readily marketable and acceptable to many destinations, both domestically and globally, with very little need for extra checks. Furthermore, the Trade Assurance schemes that merchants, storekeepers, laboratories, and hauliers comply with means we can move and store Farm Assured grain, confident it is fit for purpose and fully traceable. Globally, other Trade Assurance schemes exist which uphold the same standards and are mutually recognised. But, when consumers buy imported goods into the UK, they also use contracts which ensure that imported goods are legally fit for purpose and comply with UK laws and regulations. In a very regulated world, we are all trading in food and feed and can’t afford to kill anyone or anything. In the last few years, even with big cereal crops, the UK has imported around 1.8 million metric tonnes of wheat annually and some 2.3 million metric tonnes of maize – much from the EU, but also much from third country origins. On the other side, the UK has successfully exported up to 2.8 million metric tonnes of wheat, and this year will have exported over 1.7 million metric tonnes of barley. Trade works both ways, but many overseas buyers of UK grain appreciate the Farm and Trade Assurance that comes with UK grains just as much as domestic consumers in the UK know how important it is to have the right assurance, quality status and contract terms on imports into the UK.

What the UK can’t protect itself from is the unseen and undetectable, caused by different legislation in different countries – be that monetary subsidies to
other countries farmers or the ability to use certain chemicals which are undetectable on final product. UK farmers need to bring these issues to the Government’s attention and ensure that any new UK legislation is built of scientific facts not well lobbied emotional fear. The 1st of January 2021 will bring opportunities for all in UK agriculture, but we need to be clear on the facts, stick together and focus hard on real issues – and not chase shadows and create fear through ignorance.

Fertiliser matters
The new-season fertiliser campaign commenced earlier than initially expected, starting on 28th May, with offers from June through to September available ranging from a flat price to price increases per month depending on supplier, says Openfield’s fertiliser manager, Lucy Hassell. Despite a lower cropping area coupled with carry-over stock on farm following the effects of weather conditions, the industry saw a strong uptake – with some September offers selling out within a few hours. Some growers in the worst affected areas sat out of the market with a view to look at purchasing after harvest.
Early June saw a high rise in urea values following further demand from India, and a change in currency with prices creeping up by around £20 per tonne for later delivery months. The current outlook on fertiliser certainly points towards a firming market with urea, UK AN and imported AN all showing higher values than the re-set price for forward months.