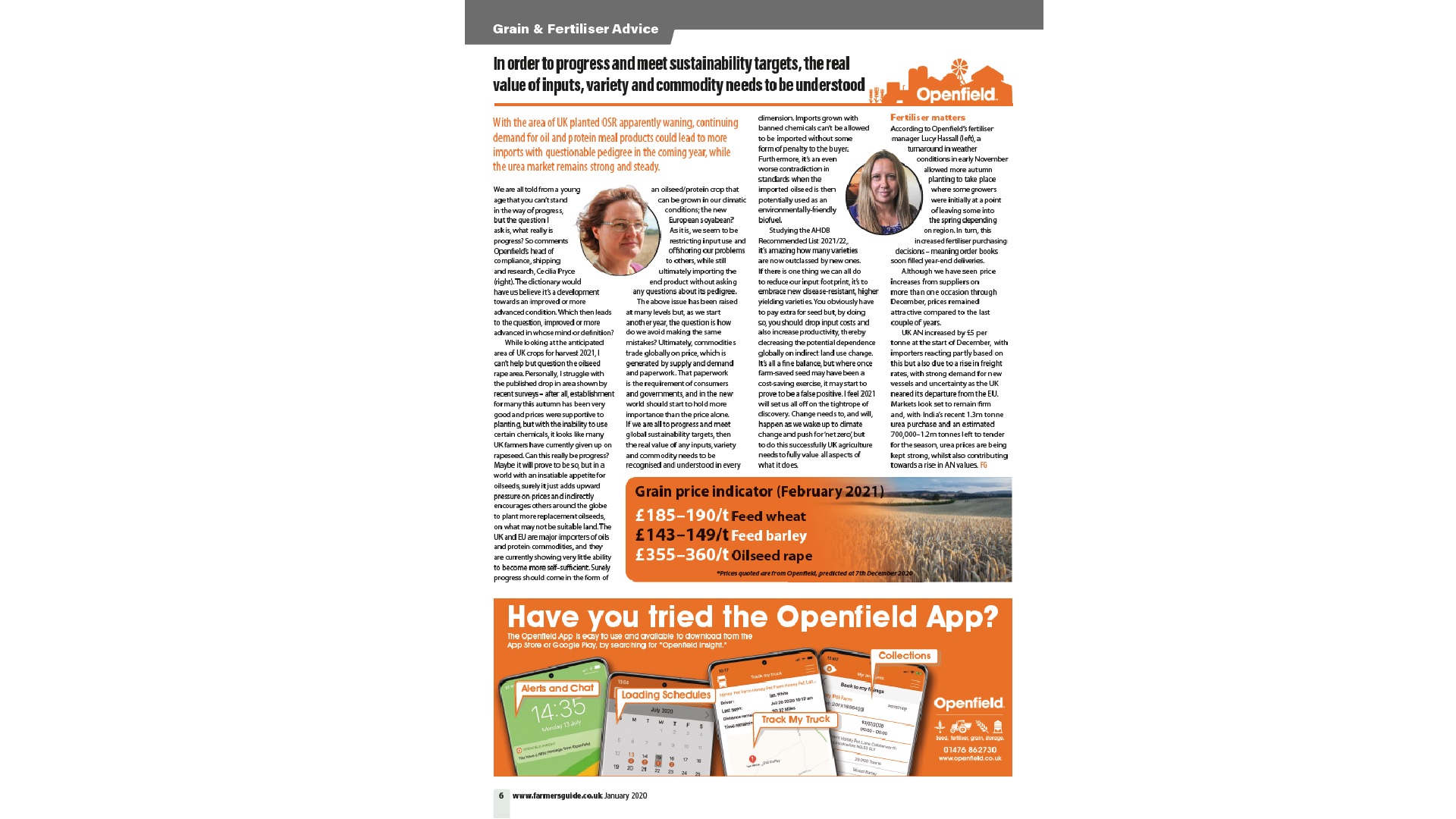 In order to progress and meet sustainability targets, the real value of inputs, variety and commodity needs to be understood

With the area of UK planted OSR apparently waning, continuing demand for oil and protein meal products could lead to more imports with questionable pedigree in the coming year, while the urea market remains strong and steady.

While looking at the anticipated area of UK crops for harvest 2021, I can’t help but question the oilseed rape area. Personally, I struggle with the published drop in area shown by recent surveys – after all, establishment for many this autumn has been very good and prices were supportive to planting, but with the inability to use certain chemicals, it looks like many UK farmers have currently given up on rapeseed. Can this really be progress? Maybe it will prove to be so, but in a world with an insatiable appetite for oilseeds, surely it just adds upward pressure on prices and indirectly encourages others around the globe to plant more replacement oilseeds, on what may not be suitable land. The UK and EU are major importers of oils and protein commodities, and they are currently showing very little ability to become more self-sufficient. Surely progress should come in the form of an oilseed/protein crop that can be grown in our climatic conditions; the new European soyabean?

As it is, we seem to be restricting input use and offshoring our problems to others, while still ultimately importing the end product without asking any questions about its pedigree. The above issue has been raised at many levels but, as we start another year, the question is how do we avoid making the same mistakes? Ultimately, commodities trade globally on price, which is generated by supply and demand and paperwork. That paperwork is the requirement of consumers and governments, and in the new world should start to hold more importance than the price alone. If we are all to progress and meet global sustainability targets, then the real value of any inputs, variety and commodity needs to be recognised and understood in every dimension. Imports grown with banned chemicals can’t be allowed to be imported without some form of penalty to the buyer. Furthermore, it’s an even worse contradiction in standards when the imported oilseed is then potentially used as an environmentally-friendly biofuel. Studying the AHDB Recommended List 2021/22, it’s amazing how many varieties are now outclassed by new ones. If there is one thing we can all do to reduce our input footprint, it’s to embrace new disease-resistant, higher yielding varieties. You obviously have to pay extra for seed but, by doing so, you should drop input costs and also increase productivity, thereby decreasing the potential dependence globally on indirect land use change. It’s all a fine balance, but where once farm-saved seed may have been a cost-saving exercise, it may start to prove to be a false positive. I feel 2021 will set us all off on the tightrope of discovery. Change needs to, and will, happen as we wake up to climate change and push for ‘net zero’, but to do this successfully UK agriculture needs to fully value all aspects of what it does.

Fertiliser matters
According to Openfield’s fertiliser manager Lucy Hassall (left), turnaround in weather conditions in early November allowed more autumn planting to take place where some growers were initially at a point of leaving some into the spring depending on region. In turn, this increased fertiliser purchasing decisions – meaning order books soon filled year-end deliveries. Although we have seen price increases from suppliers on more than one occasion through December, prices remained attractive compared to the last couple of years. UK AN increased by £5 per tonne at the start of December, with importers reacting partly based on this but also due to a rise in freight rates, with strong demand for new vessels and uncertainty as the UK neared its departure from the EU. Markets look set to remain firm and, with India’s recent 1.3m tonne urea purchase and an estimated 700,000–1.2m tonnes left to tender for the season, urea prices are being kept strong, whilst also contributing towards a rise in AN values.