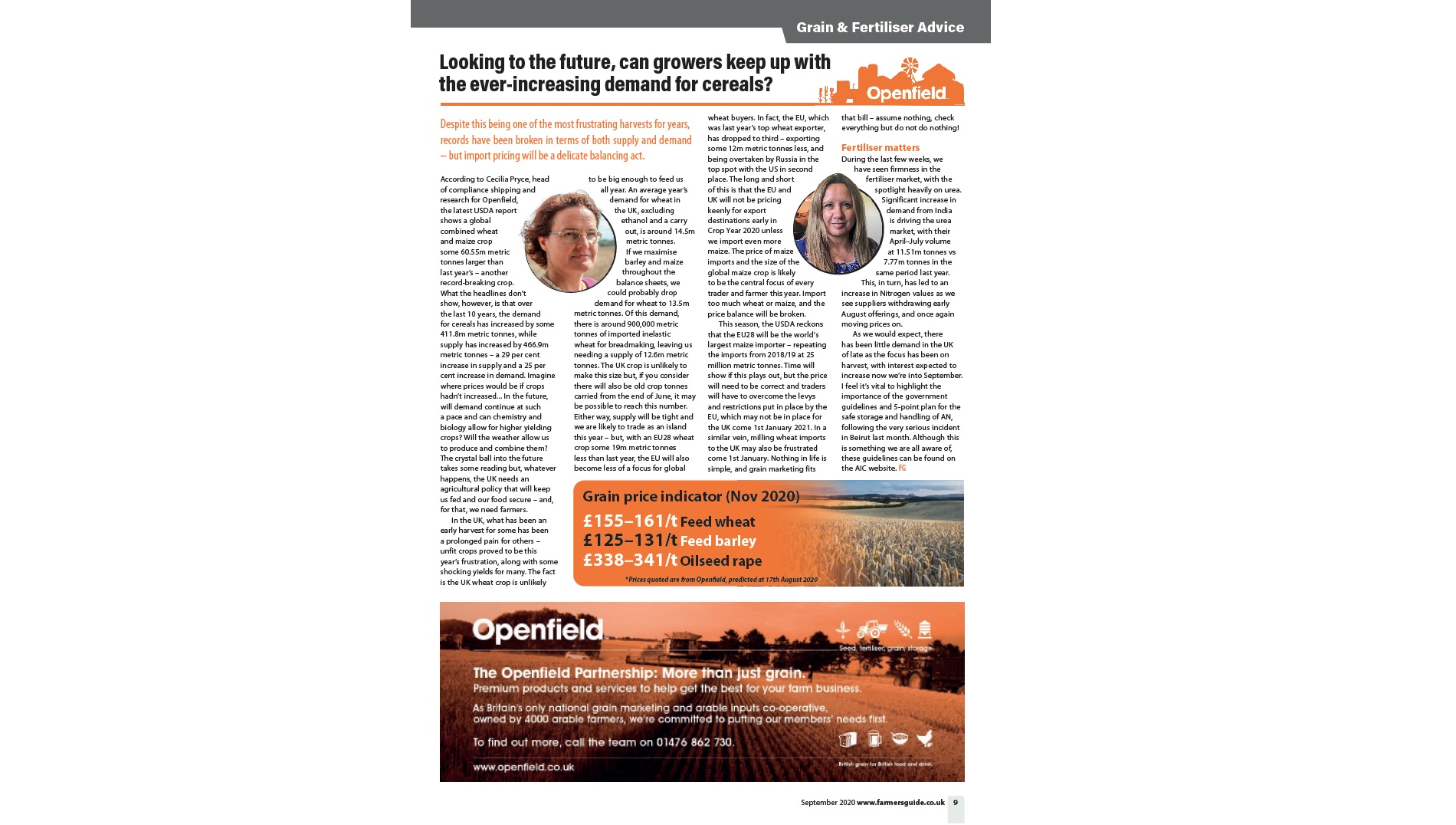 Looking to the future, can growers keep up with the ever-increasing demand for cereals

Despite this being one of the most frustrating harvests for years, records have been broken in terms of both supply and demand – but import pricing will be a delicate balancing act.

The latest USDA report shows a global combined wheat and maize crop some 60.55m metric tonnes larger than last year’s – another record-breaking crop. What the headlines don’t show,  however, is that over the last 10 years, the  demand for cereals has increased by some 411.8m metric tonnes, while supply has increased by 466.9m metric tonnes – a 29 per cent increase in supply and a 25 per cent increase in demand. Imagine where prices would be if crops hadn’t increased… In the future, will demand continue at such a pace and can chemistry and biology allow for higher yielding crops? Will the weather allow us  to produce and combine them? The crystal ball into the future takes some reading but, whatever happens, the UK needs an agricultural policy that will keep us fed and our food secure – and, for that, we need farmers.

In the UK, what has been an early harvest for some has been a prolonged pain for others – unfit crops proved to be this year’s frustration, along with some shocking yields for many. The fact is the UK wheat crop is unlikely to be big enough to feed us all year. An average year’s demand for wheat in the UK, excluding ethanol and a carry out, is around 14.5m metric tonnes.

If we maximise barley and maize throughout the balance sheets, we could probably drop demand for wheat to 13.5m metric tonnes. Of this demand, there is around 900,000 metric tonnes of imported  inelastic wheat for breadmaking, leaving us needing a supply of 12.6m metric tonnes. The UK crop is unlikely to make this size but, if you consider there will also be old crop tonnes

carried from the end of June, it may be possible to reach this number. Either way, supply will be tight and we are likely to trade as an island this year – but, with an EU28 wheat crop some 19m metric tonnes less than last year, the EU will also become less of a focus for global wheat buyers. In fact, the EU, which was last year’s top wheat exporter, has dropped to third – exporting some 12m metric tonnes less, and being overtaken by Russia in the top spot with the US in second place. The long and short of this is that the EU and UK will not be pricing keenly for export destinations early  in Crop Year 2020 unless we import even more maize. The price of maize imports and the size of the global maize crop is likely to be the central focus of every trader and farmer this year. Import too much wheat or maize, and the price balance will be broken.

This season, the USDA reckons that the EU28 will be the world’s largest maize importer – repeating the imports from 2018/19 at 25 million metric tonnes. Time will show if this plays out, but the price will need to be correct and traders will have to overcome the levys  and restrictions put in place by the EU, which may not be in place for the UK come 1st January 2021. In a similar vein, milling wheat imports to the UK may also be frustrated come 1st January. Nothing in life is simple, and grain marketing fits that bill – assume nothing, check everything but do not do nothing!

During the last few weeks, we have seen firmness in the fertiliser market, with the spotlight heavily on urea. Significant increase in demand from India is driving the urea market, with their April–July volume at 11.51m tonnes vs 7.77m tonnes in the same period last year. This, in turn, has led to an increase in Nitrogen values as we see suppliers withdrawing early August offerings, and once again moving prices on. As we would  expect, there has been little demand in the UK of late as the focus has been on harvest, with interest expected to increase now we’re into September. I feel it’s vital to highlight the importance of the government guidelines and 5-point plan for the safe storage and handling of AN, following the very serious incident in Beirut last month. Although this is something we are all aware of, these guidelines can be found on the AIC website.