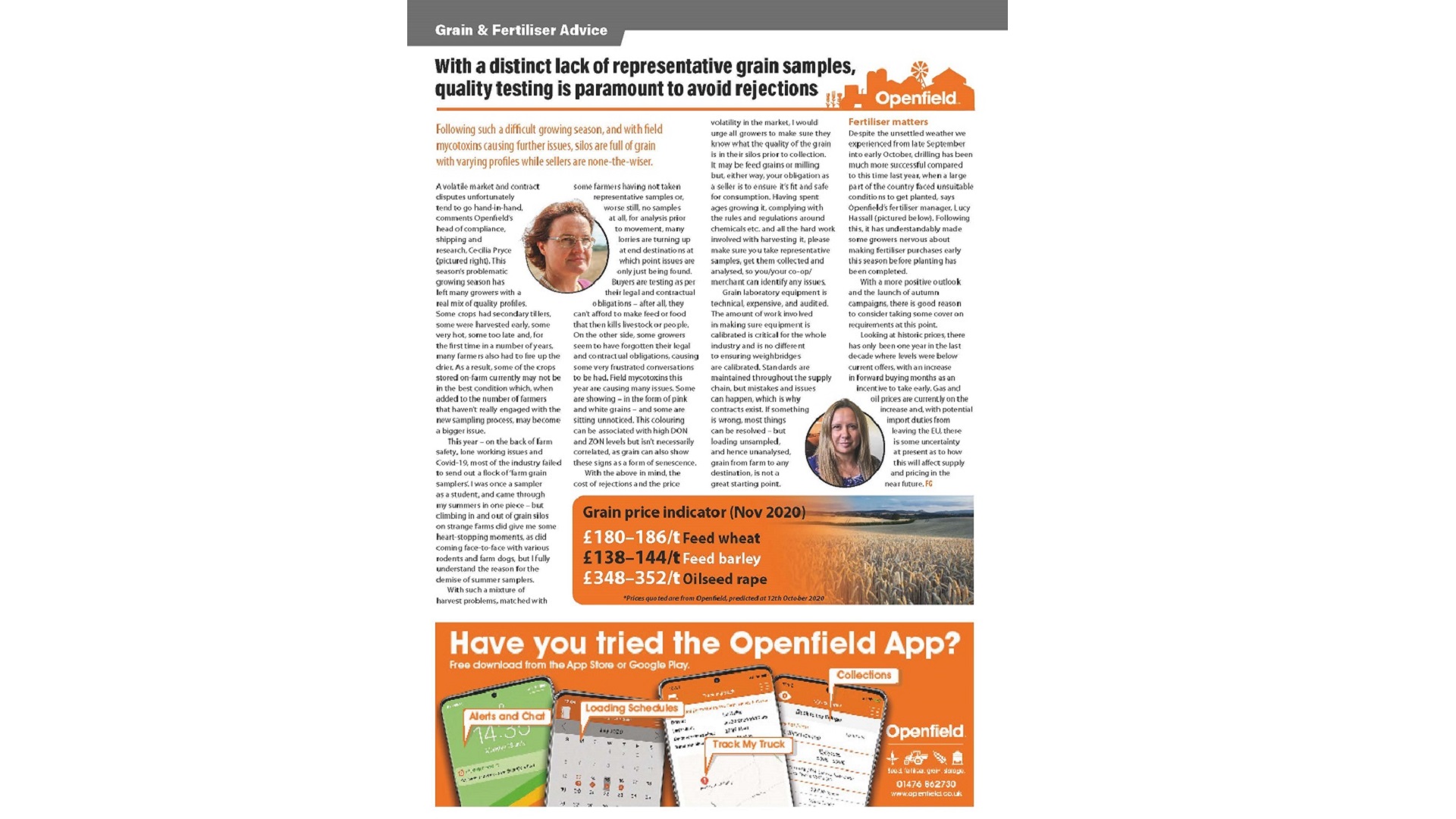 With a distinct lack of representative grain samples, quality testing is paramount to avoid rejections

Following such a difficult growing season, and with field mycotoxins causing further issues, silos are full of grain with varying profiles while sellers are none-the-wiser.

Some crops had secondary tillers, some were harvested early, some very hot, some too late and, for the first time in a number of years, many farmers also had to fire up the drier. As a result, some of the crops stored on-farm currently may not be in the best condition which, when added to the number of farmers that haven’t really engaged with the new sampling process, may become a bigger issue.

This year – on the back of farm safety, lone working issues and Covid-19, most of the industry failed to send out a flock of ‘farm grain samplers’. I was once a sampler as a student, and came through my summers in one piece – but climbing in and out of grain silos on strange farms did give me some heart-stopping moments, as did coming face-to-face with various rodents and farm dogs, but I fully understand the reason for the demise of summer samplers. With such a mixture of harvest problems, matched with some farmers having not taken representative samples or, worse still, no samples at all, for analysis prior to movement, many lorries are turning up at end destinations at which point issues are only just being found. Buyers are testing as per their legal and contractual obligations – after all, they can’t afford to make feed or food that then kills livestock or people. On the other side, some growers seem to have forgotten their legal and contractual obligations, causing some very frustrated conversations to be had. Field mycotoxins this year are causing many issues. Some are showing – in the form of pink and white grains – and some are sitting unnoticed. This colouring can be associated with high DON and ZON levels but isn’t necessarily correlated, as grain can also show these signs as a form of senescence. With the above in mind, the cost of rejections and the price volatility in the market, I would urge all growers to make sure they know what the quality of the grain is in their silos prior to collection. It may be feed grains or milling but, either way, your obligation as a seller is to ensure it’s fit and safe for consumption. Having spent ages growing it, complying with the rules and regulations around chemicals etc. and all the hard work involved with harvesting it, please make sure you take representative samples, get them collected and analysed, so you/your co-op/ merchant can identify any issues. Grain laboratory equipment is technical, expensive, and audited. The amount of work involved in making sure equipment is calibrated is critical for the whole industry and is no different to ensuring weighbridges are calibrated. Standards are maintained throughout the supply chain, but mistakes and issues can happen, which is why contracts exist. If something is wrong, most things can be resolved – but loading unsampled, and hence unanalysed, grain from farm to any destination, is not a great starting point.

Fertiliser Matters
Despite the unsettled weather we experienced from late September into early October, drilling has been much more successful compared to this time last year, when a large part of the country faced unsuitable conditions to get planted, says Openfield’s fertiliser manager, Lucy Hassall (pictured below). Following this, it has understandably made some growers nervous about making fertiliser purchases early this season before planting has been completed. With a more positive outlook and the launch of autumn campaigns, there is good reason to consider taking some cover on requirements at this point. Looking at historic prices, there has only been one year in the last decade where levels were below current offers, with an increase in forward buying months as an incentive to take early. Gas and oil prices are currently on the increase and, with potential import duties from leaving the EU, there is some uncertainty at present as to how this will affect supply and pricing in the near future.